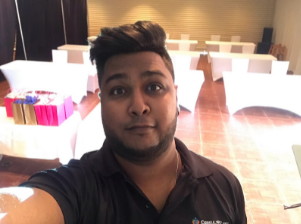 In April 2020, Consult PR welcomed Andrew Persaud to our team of talented individuals as our Operations Manager. In just a few short months, his wealth of experience, easy going character and proclivity for procedures secured him a promotion to our Assistant Vice President of Human Resources and Business Process Outsourcing (whew! what a mouthful!). Andrew has shown himself to be a special individual from the very beginning. During his job interview he surprised our interview panel by giving them an interview of their own, citing the importance of ensuring that this company is right for him.

Before joining Consult PR, Andrew worked virtually for a software company, a position that helped him develop his skills for managing teams. His forte quickly became being able to grow startups and small companies. In fact, he recalls one of the most defining moments of his career being his job as General Auditor for a local bar. At that job, he spent many late nights and early mornings helping to streamline their accounting system and create a whole new auditing system that allowed them to identify their losses and take the necessary steps to decrease these.

A graduate of The Business School and the holder of a Bachelor’s Degree in International Relations from the University of Guyana, Andrew enjoys expanding his education. He hopes to take a few courses in the field of Human Resources. As someone who gets bored easily, Andrew is constantly finding new things to do and learn.

On the personal side, Andrew likes to spend quality time with his family, friends and three dogs. He enjoys a good board game and more recently has developed a love for working with music. He spends a lot of his spare time working with a studio where he has been exploring aspects of songwriting, song production and even a little bit of vocal training. He loves to watch anime and oddly enough enjoys driving different categories of vehicles. He casually quipped that he often switches cars with his friends just to drive a different vehicle and he loves taking to the road for a nice long drive. He hopes to one day have a license to drive every type of motor vehicle there is (motorcycle, lorry, 18 wheeler, forklift, ATV and more).

Andrew believes in hard work and he thanks one of his mentors and a former boss, a woman named Binothi, for helping him to develop a strong work ethic. She taught him to not make excuses and to work hard. Andrew describes himself as comfortable, innovative, well-spoken and if you ever have the pleasure of speaking with him you would see that this is very much true. He believes in people being where they’re supposed to be. It’s important, for your mental health and your happiness, to feel you belong wherever you are, whether it's a job, house, friend group, whatever. In that same vein, Andrew believes he’s exactly where he’s supposed to be here at Consult PR and we are delighted to have found this gem of a leader and we look forward to his many great accomplishments ahead!