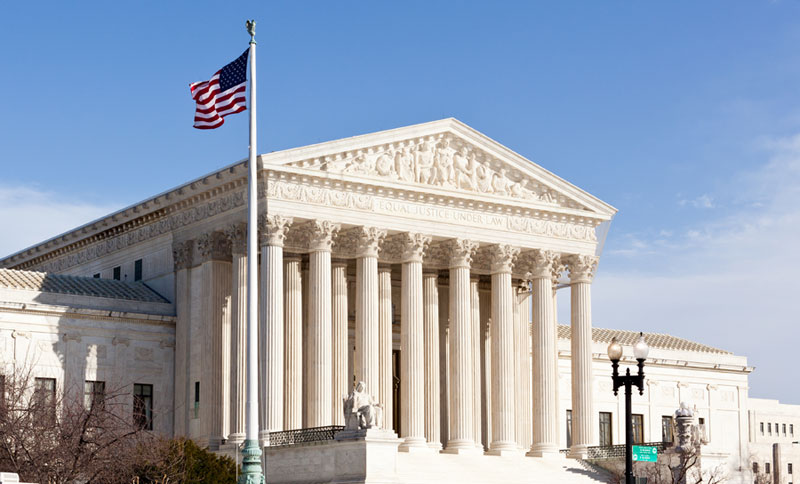 The Supreme Court ruled Thursday that states can compel retailers to collect sales taxes even if they don't have a physical presence in the state.
The 5-4 decision overturns a 1992 Supreme Court precedent that effectively barred states from collecting such taxes, and could leave consumers paying more for online purchases as cash-strapped states tap a rich vein of new revenue.

In making their decision, justices ruled that South Dakota can collect sales taxes from online retailers like Wayfair, which was sued by the state. In doing so, the court reversed a 1992 ruling that allowed states to levy taxes only on those businesses with a brick-and-mortar location within the state. The court said that law effectively incentivized businesses to "avoid physical presence" in states and led to "a judicially created tax shelter." Ultimately, the justices deemed the current law outdated.

"The Internet's prevalence and power have changed the dynamics of the national economy," Justice Anthony Kennedy wrote in the majority opinion. "The expansion of e-commerce has also increased the revenue shortfall faced by States seeking to collect their sales and use taxes."

Sucharita Kodali, a retail analyst with Forrester, called the ruling "bad news" for thousands of major online retailers. "Now those companies have to assess taxes on customers or they get sued. For products like furniture, jewelry, electronics, people will likely start to shop local again," she said.

South Dakota's law applies only to those businesses with more than $100,000 in sales, or at least 200 transactions, in the state each year. Thirty-one states already levy online sales taxes of some sort. It remains unclear whether Thursday's ruling will prompt them to revise their laws, or encourage the remaining 19 states to impose taxes on retailers even smaller than those affected by South Dakota's law.

"I imagine most states will adjust their laws," Joseph Bishop-Henchman, executive VP at Tax Foundation, told CNNMoney. If states have a much lower sales threshold, or no threshold at all, "this ruling would not directly apply. It'd be a new case."

"I could see states trying it," he added, "but if I was their legislative counsel I would advise against it."

Thursday's ruling means you're probably going to pay more for that sofa from Wayfair or a rug from Overstock.

"If you are buying a lot of furniture that you are having delivered to your house from a pretty big seller, you are going to start paying taxes," said Stephanie Martz, senior VP and general counsel at the National Retail Federation.

That said, you probably won't pay more for the artisanal products offered by small retailers on Etsy or eBay. eBay, a home to thousands of small sellers, framed the ruling as "limited to large online retailers" in a statement to CNNMoney. It also says the ruling shows "small businesses are clearly viewed differently by the Court." Still, eBay called on Congress "to provide clear tax rules with a strong small business exemption."

Jonathan Johnson, an Overstock board member, echoed that call in a statement. "To lessen the potential impact of today's ruling on internet innovation," he said, "Congress can, and should, pass sound legislation allowing states to accomplish their aims while still permitting small internet business to thrive."

The justices disagreed on that point when they heard the case in April, and again in their ruling. In his majority opinion, Justice Kennedy said it was "inconsistent" for the Supreme Court to ask Congress to "address a false constitutional premise of this Court's own creation."

In a separate statement, Wayfair said it welcomed the "additional clarity" from the Supreme Court decision, while reiterating its support for "a legislative solution that would establish a level playing field for brick-and-mortar and online retailers."

State and local governments had grown increasingly agitated as sales from brick and mortar retailers gave way to online retail, which now comprises approximately 9.5% of the dollar value of total purchases.

Prohibitions against collecting sales taxes from online retailers cost states as much as $13.4 billion last year, according to the Government Accountability Office. Although the IRS requires consumers to tally their purchases and pay all applicable taxes with their regular filing, few people do.

Many large online retailers, including Amazon and Wal-Mart, already collect sales taxes because they have a large enough physical presence in each state to qualify as taxable by states. But plenty of smaller players, such as home furnishings websites Overstock.com and Wayfair, don't have widespread enough operations to be subject to state taxing authority, giving them a substantial price advantage over traditional brick and mortar businesses.

It's unlikely the court ruling will halt the rapid ascent of ecommerce, which was fueled in part by the 1992 decision.

"Physical stores think this will level the playing field, but honestly it's too little too late to ever help the likes of Sears or JCPenney," Kodali said.

The evidence of that can be found in a staggering statistic cited in Justice Kennedy's majority opinion. "In 1992, mail-order sales in the United States totaled $180 billion," he wrote. "Last year, e-commerce retail sales alone were estimated at $453.5 billion."